Travel packages in Ica - The city of eternal sun 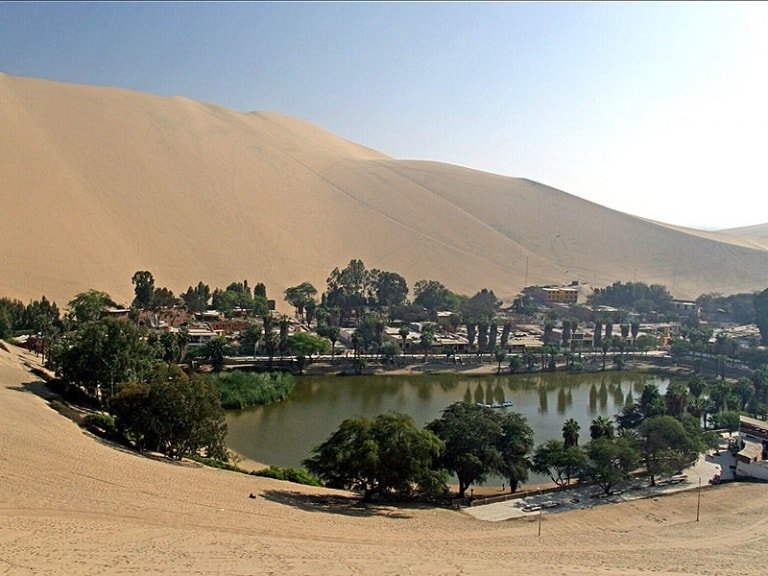 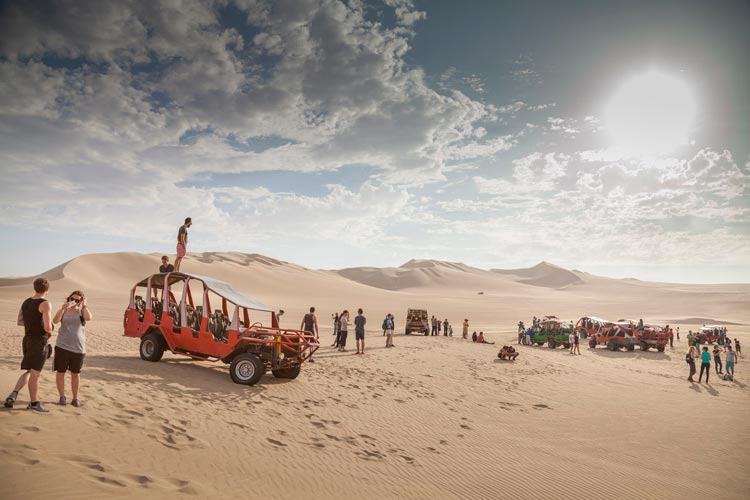 Much of the Ica Region in south-central Peru is subtropical coastal desert, although it also includes part of the Andean Range. Its bordered by Lima to the North, Arequipa to the south, Huancavelica and Ayacucho to the east, and the Pacific Ocean to the west.

The desert turns green and full of plant life in the river valleys formed by important rivers such as the Pisco, Ica, Río Grande in Palpa and Nazca and the San Juan River in Chincha. Thanks to these important waterways, agriculture is the main sector of the economy in this region, which grows crops such as cotton and legumes, grapes for Peruvian Pisco and other quality wines, and aparagus and pecans for exportation. Ica has made Peru the largest asparagus exporter in the world.

You´ll be surprised to see lush green vineyards sprawling across land reclaimed from the desert. Wine-lovers can´t afford to skip a visit to one of Ica´s vineyards and wine cellars to learn about the traditional process of producing one of Peru´s most famous products, the celebratedPiscoand participate in a wine-tasting to sample local wares of this aromatic white-grape brandy which originated in this region 400 years ago.

Fishing is another important economic activity in Ica, whose long coastal strip is dotted with picturesque fishing villages. It has various islands as well, the most famous of which are theBallestas Islandsoff of the Paracas coast by theParacas National Reserve. The National Reserve of Paracas constitutes one of the most important natural areas in Peru, protecting a great biodiversity of marine species, such as Humboldt Penguins, guano-producing birds, sealions, flamingos, etc. In the reserve you’ll encounter pristine beaches and massive rock formations.

Ica posseses a warm desert climate of the dry subtropical type, with an average temperature of about 71°F. In contrast to the central coastal areas such as Ancash and Lima, the climate of Ica is dry and sunny even during the winter months, earning Ica the nicknameTheCityofEternalSun. although the nights in winter are colder and can dip as low as 45°F. The summers are warmer and drier than the central coast and can approach 97°F, above all in the city of Ica which is located inland. The presence of paracas or strong winds is very common during the summer months.

The city of Ica in the central south of Peru, is the capital of the department of the same name, situated in the narrow valley formed by the Ica River. Bordered on one side by the Pacific Ocean and on the other by the western slopes of the Andean Cordillera, it was the cradle of important pre-Columbian civilizations whose footprints were left behind in the form of pyramids, mummies, and other artifacts. The vineyards and extensive orchards and groves of asparagus, date palms, cotton, mango, and avocado make it an especially scenic area to visit and its coastal waters is one of the richest seas in the world, with an astounding diversity of marine birds, penguins, sealions and more.

Fossilized remains suggests the presence of settled human colonies in Santo Domingo of Paracas 8,800 years ago, whose people wore clothing of llama hides and cactus fiber and who are believed to have been the first farmers on the the continent. The most important civilizations to have arisen in the Ica Region are theParacasand theNazcaCivilizations. The Paracas were known for their textiles, which employed up to 200 shades and 22 dyes in a single garment. The Paraca culture dates back to around 600BC and is known for their textiles of cotton, vicuña, and alpaca which used intricate designs. Their successors, the Nazca shone especially in the area of ceramics, with multicolored pottery with surrealistic designs. TheChinchaculture flourished in teh northern zone after the fall of these civilizations. Excellent seafarers and traders, they appeared to have had good relations with the Inca, being integrated into the Empire along with the rest of the zone during the reign of Inca Pachacútec.

The Conquest and Colonial Period

The Chincha Chief fell in Cajamarca to Spanish forces, in the same battle during which Inca Atahualpa was captured in 1533. The following year one of Pizarro´s confidantes founded the Villa of Sangallán in Pisco Province with the hope that it would become the new capital city, although Pizarro ultimately chose Lima. The confidante, Nicolás de Rivera, had to subdue multiple local indigenous rebellions directed by the Ica, Chincha, Pisco, and Nazca chiefs. Spanish estates were built and the area developed quickly due to the growing wine and Pisco brandy market.

After almost 3 centuries of Spanish domination the first emancipatory movements began to appear. The first expedition of General San Martín disembarked in the bay of Paracas in 1820, with more than 4,000 Argentinean, Peruvian, and Chilean troops. San Martín established his headquarters in Pisco, dividing his forces to advance on Chincha and Nazca in October of that year. Nazca swore independence after 2 days and the city of Ica’s independence was proclaimed four days later.

Over time as Ica aquired more importance as its agricultural continued to develop steadily, and President Castilla separated it from the Lima’s political and administration in 1855, creating the Coastal Province of Ica. The Department of Ica was declared 11 years later under Provisory Executive Coronel Prado, during whose goverment war was declared with Spain, temporarily costing Ica the guano-rich Chincha Islands. In 1880 during the War with Chile, Ica suffered the Chilean invasion of Pisco.

Today Ica is one of the best developed departments in the country, although it must continually affront crises such as water scarcity. In 1998 the city of Ica was flooded when the landslides caused the Ica River to overflow, and in 2007 the city was severely affected by an earthquake from which a majority of the department is still recuperating.