Surface area – Peru With an area of 1,285,215 peru square km, Peru is the third-largest country in South America after Brazil and Argentina, ranking it amongst the worlds 20 largest nations. Peru also holds sway over the sea up to 200 miles from the Peruvian coast and has territorial rights to an area of 60 million hectares in the Antarctic.
Peru is divided into 24 departments, plus the Constitutional Province of Callao. Lima is the capital of Peru. Population – Peru 25.662.000inhabitants Urban:72,3% Rural:27,7% Peru is a nation of mixed ethnic origins. Throughout its history, Peru has been the meeting ground for different nations and cultures. The indigenous population was joined 500 years ago by the Spaniards. As a result of this encounter, and later enriched by the migration of African blacks, Asians and Europeans, Peruvian man emerged as the representative of a nation whose rich ethnic mix is one of its leading characteristics. 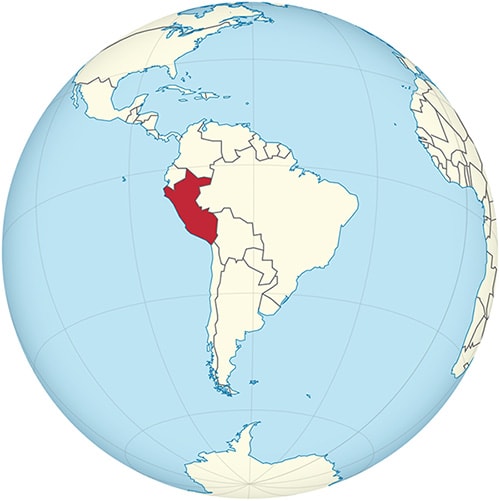 Language – Peru Oficcial-languages: -Spanish: 80,3% -Quechua: 16,2% -Other-languages: 3,0% -Foreign-languages: 0,2% As part of its rich cultural tradition, Peru features many different languages. Although Spanish is commonly spoken across the country, Quechua is a major legacy of the Inca empire, and is still spoken with regional dialects in many parts of Peru. In addition, other languages are spoken such as Aymara (in Puno) and a startling variety of dialects in the Amazon jungle, which are divided up into 15 linguistic families and 38 different languages.
Government – Peru  is a democratic republic. The president and members of Congress are elected every five years by universal suffrage. The current constitutional president of Peru is Alejandro Toledo Manrique (2001-2006). Religion Peru Roman Catholic: 89% Evangelical: 7% Other religions: 4% Peru is a naturally religious country: a diversity of beliefs and freedom of worship can be seen from the wide range of festivals and rituals that feature both Catholic fervor and the mysticism of age-old pre-Hispanic cultures.
Orientation Peru is located on the Central West Coast of South America. Its neighbouring countries are: Ecuador and Colombia to the N; Chile to the S; Brazil and Bolivia to the E; and the Pacific Ocean to the W. It is the third largest country in South America, with a surface area of 1 285 215,6 km2 (larger than France, Spain, and Germany combined) distributed approximately in the following manner: 12% Coastal territory, 28% Andean highlands and 60% Amazon jungle. Its Capital, Lima, is located in the Coastal area, where the countrys main economic activities take place. Time Zone Peruvian time is five hours past Greenwich Mean Time and is similar to Eastern Standard Time in the United States (except when the U.S. goes on daylight savings time from April to October).
In reference to other cities, when it is noon in Peru, it is: Being such a geographically diverse country within the tropical belt, the weather in Peru is determined both by altitude and season. However, it also means that there is almost invariably sunshine somewhere in Peru! Below is a summary of the weather conditions you can expect to find in each different region of the country at different times of the year. Coast (Ica, Chiclayo, Lima, Piura, Trujillo, Tumbes) Northern region: warm year-round with highs of up to 35°C in the Summer. Central and Southern regions: two well-defined seasons, Winter between April and October, and Summer between November and March. Highlands (Ancash, Arequipa, Ayacucho, Cajamarca, Cusco, Puno) This region has two seasons, dry season between April and October, and rainy season between November and March. Weather Temperatura: Perus climate may be divided into two: The Western Andes and the Desert Coast. On the Coast, it does not rain and the temperature is warm through the year. On the other hand, in the Andes, there are two seasons: Rainy and dry. Cusco is located in the Eastern Andes, so its rainy season is from October to May, the rest of the year it is dry. Rainy time, starting in October/ November has its own maximum in January, continuing until March/ April. In years of pouring rain there are landslides, floods, etc. In the Highlands, it is cold in the evenings but sunny and warm in the mornings. It is even possible to wear t-shirts, but when the sun sets it gets really chilly so please bring a warm sweater (or buy an alpaca one in Cusco) and a good jacket. Finally, the weather in general does not represent a limit to provide any tourist services, except from some particularily bad years. Current conditions for lima Water Tap water in most of Peru is potable, but the chemical content varies from place to place. To avoid problems, we recommend you to always drink bottled water. 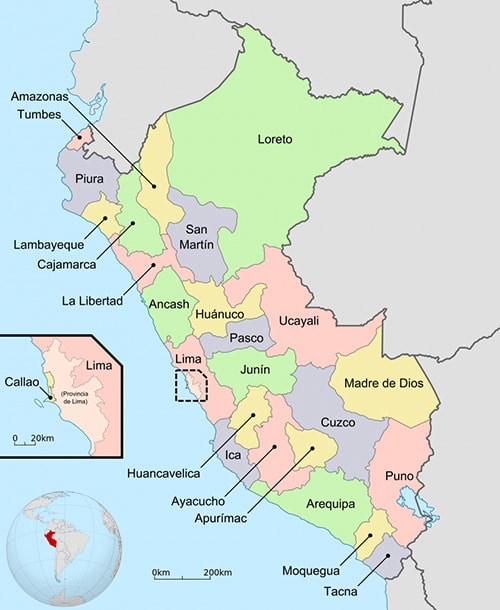 Visas All travelling passengers should refer to their closest Peruvian Embassy to check which visas are required, although current visa requirements may be subject to change at any time Photography If you are taking photographs of local people, always ask their permission beforehand. Your guide can assist you in this. Do not take photographs of military installations or airports.
Film is readily available in all tourist areas. It is advisable to carry your camera in a dust-proof bag. Photography or camera fees are applicable at most sights and museums; your guide can give you details of the latest charges. Electricity The voltage supply in Peru is 220 volts AC, 60 Hz. Special travel adapters can be purchased to enable all normal plugs to fit all mains sockets. Health Vaccinations Full details of the latest health requirements should be obtained from an authorized medical source, such as your doctor. There are no mandatory health requirements for Peru, unless you plan a trip to the Rainforest, in which case you need a Yellow Fever Vaccination Certificate Because you are visiting Andean areas, dont forget to take precautions to avoid altitude sickness. Be sure to try hot tea or infusion of coca leaves on your arrival in the altitude; during your first day move slowly and eat lightly. Altitude Lima sea level, 54 m.a.s.l Cusco 3360 m.a.s.l Machu picchu 2400 m.a.s.l Urumbamba valley: 2850 m.a.sl Puno: 3860 m.a.sl La paz: 3540 m.a.sl
Peruvian Gastronomy Peruvian cuisine is highly varied and spicy. Some of our typical dishes are: “Cebiche” (raw fish marinated in lime juice), “Aji de Gallina” (de-boned chicken cooked in a milk and aji sauce), and “Anticuchos” (shish kebabs of beef heart and meat), apart from the typical dishes from each region. Be sure to try “Pisco Sour”, Perus typical mixed drink prepared with Pisco, lime, egg white and sugar. comida Restaurants during your trip: In Lima: International, vegetarian, local food restaurants and franchises of international fast food chains. In Machu Picchu and Aguas Calientes: International and local food restaurants. In Cusco: International, vegetarian and local food restaurants. 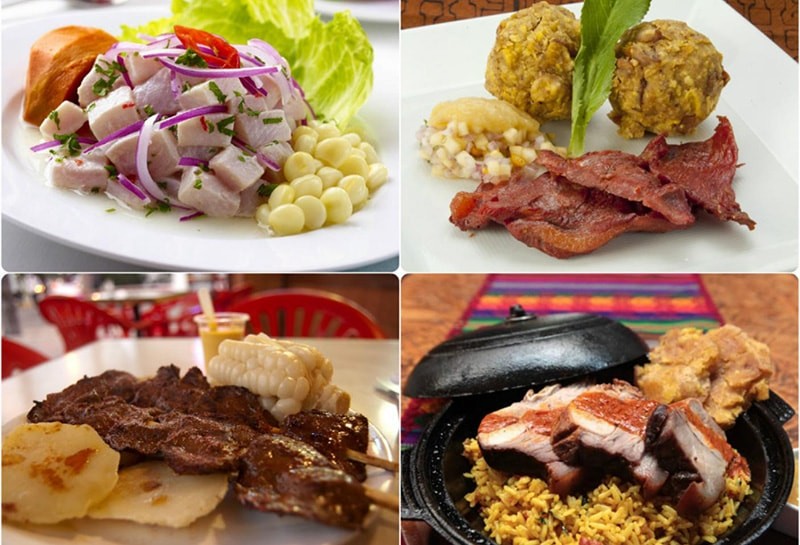 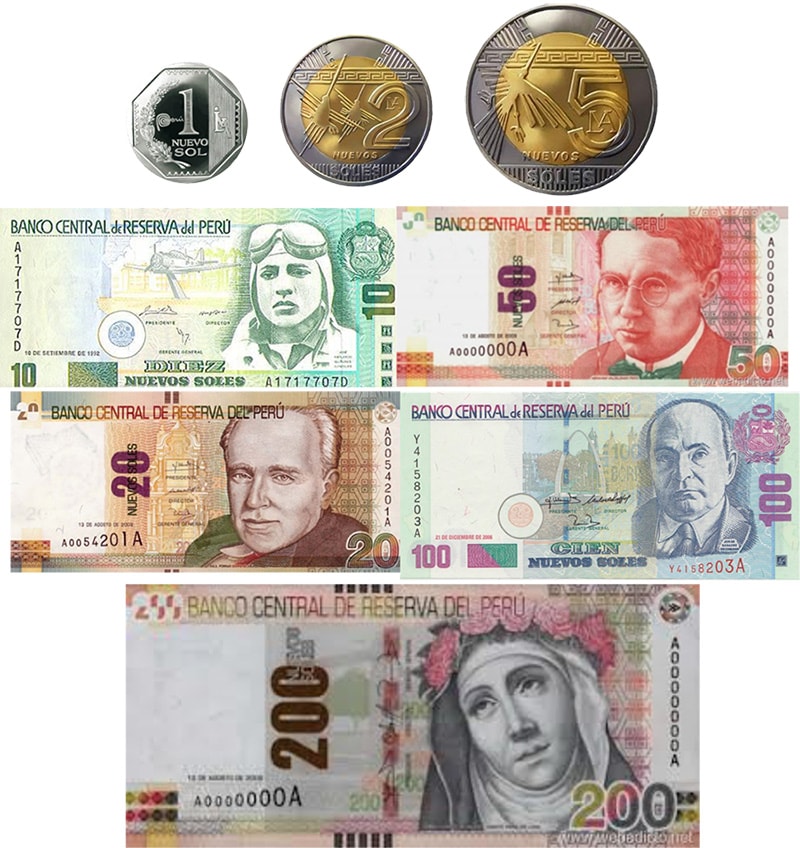