Travel packages in Chachapoyas - Known as the Country of the Clouds 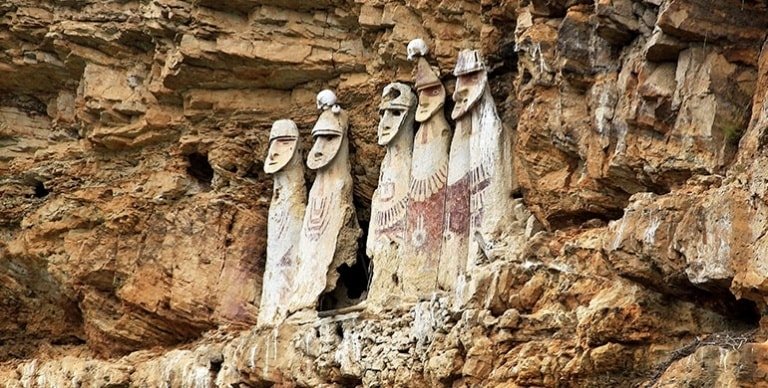 The Chachapoyas, also called the "Warriors of the Clouds", was a culture of Andes living in the cloud forests of the Amazonas Region of present-day Peru. The Inca Empire conquered their civilization shortly before the Spanish conquest in the 16th century. At the time of the arrival of the conquistadors, the Chachapoyas were one of the many nations ruled by the Incas, although their incorporation had been difficult due to their constant resistance to Inca troops.

Since the Incas and conquistadors were the principal sources of information on the Chachapoyas, there is little first-hand or contrasting knowledge of the Chachapoyas. Writings by the major chroniclers of the time, such as Inca Garcilaso de la Vega, were based on fragmentary second-hand accounts. Much of what we do know about the Chachapoyas culture is based on archaeological evidence from ruins, pottery, tombs and other artifacts. Spanish chronicler Pedro Cieza de León noted that, after their annexation to the Inca Empire, they adopted customs imposed by the Cusco-based Inca. By the 18th century, the Chachapoyas had been devastated; however, they remain a distinct strain within the indigenous peoples of modern Peru.

The Chachapoyas' territory was located in the northern regions of the Andes in present-day Peru. It encompassed the triangular region formed by the confluence of the Marañón River and the Utcubamba in Bagua Province, up to the basin of the Abiseo River where the Gran Pajáten is located. This territory also included land to the south up to the Chuntayaku River, exceeding the limits of the current Amazonas Region towards the south. But the center of the Chachapoyas culture was the basin of the Utcubamba river. Due to the great size of the Marañón river and the surrounding mountainous terrain, the region was relatively isolated from the coast and other areas of Peru, although there is archaeological evidence of some interaction between the Chachapoyas and other cultures.

The contemporary Peruvian city of Chachapoyas, Peru derives its name from the word for this ancient culture as does the defined architectural style. Inca Garcilaso de la Vega noted that the Chachapoyas territory was so extensive that.

We could easily call it a kingdom because it has more than fifty leagues long per twenty leagues wide, without counting the way up to Muyupampa, thirty leagues long more

A league was a measurement of about 5 kilometres (3.1 mi).

The area of the Chachapoyas is sometimes referred to as the "Amazonian Andes" due to it being part of a mountain range covered by dense tropical forest. The Amazonian Andes constitute the eastern flank of the Andes, which were once covered by dense Amazon vegetation. The region extended from the cordillera spurs up to altitudes where primary forests still stand, usually above 3,500 metres (11,500 ft). The cultural realm of the Amazonian Andes occupied land situated between 2,000–3,000 metres (6,600–9,800 ft).

Their architecture demonstrates decidedly non-Inca features, such as protruding geometric patterns, cornices, and friezes. Kuelap's setting is unforgettably beautiful - a tropical cloud forest festooned with orchids and steeped in mystery.

The Revash Tombs, the Karajia Sarcophagi and the extensive network of Chachapoyas paved trails also serve as a reminder of the greatness of this vanished nation. Archaeologists just now are mapping and excavating many important Chachapoyas sites. The museum in Leymebamba, which displays 200 mummies recovered from the remote Lake of the Condors, describes the extraordinary embalming methods of the Chachapoya, their lifestyle and culture. The Museum also houses a collection of knotted Quipu, the record-keeping device of the Incas.