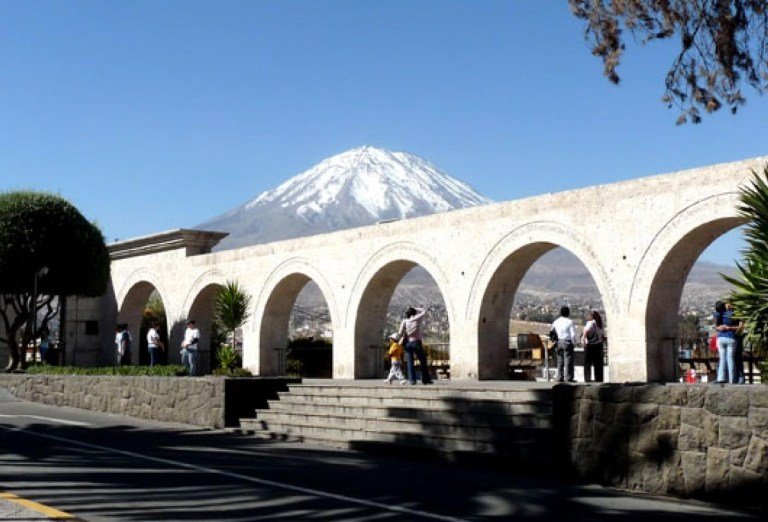 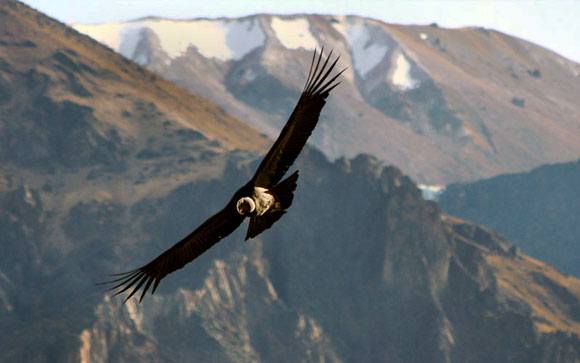 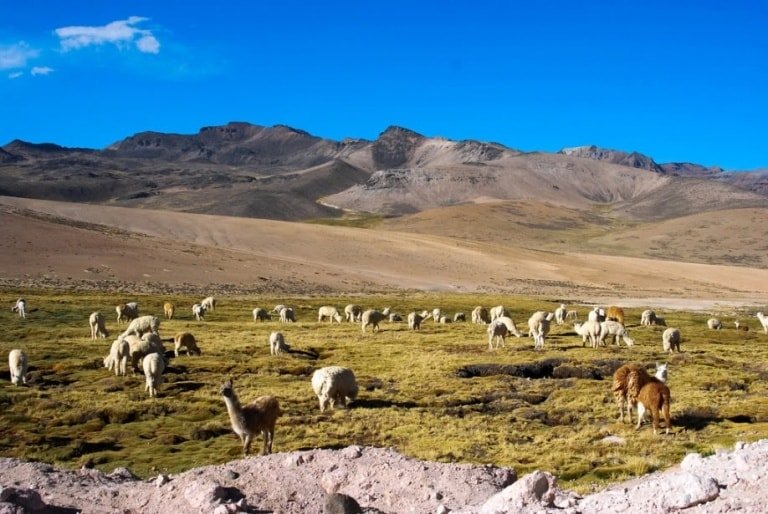 Arequipa (7638ft above sea level) is located in the southwestern part of the country, spanning from coastal desert, with 328mi of Pacific coast, to the spurs of the western Andes. Its horizon is dominated by three volcanoes, snow-cappedChachaniandPichu Picchuwith the perfectly conicalEl MistiVolcano in the center. El Misti (19,098ft) is fondly considered a symbol of the city and culture of Arequipa. There are other glacial peaks aside from Chachani and Pichu Picchu, the tallest being Mt. Ampato (20,702ft), where some of the most well-preserved and oldest ice mummies of the continent have been found. You can view some at theMuseum of Andean Sanctuaries, home of the world-famousJuanita the Ice Maidenmummy of a girl sacrificed seven hundred years ago.

Behind snowy Chachani, theCañahuas Plainsin the National Reserve of Aguada Blanca and Salinas protect grazing vicuña herds nearby theCaves of Sumbaywith their 8000 year old Paleolithic cave paintings. The territory is diverse, with low-lying plains such as those of Sihuas and La Joya and fertile river valleys such asMajes River Valley, an attractive oasis of straw and abobe homes, vineyards, ochards, and rice paddies. It is in the Majes Valley that one can find theToro Muerto Petroglyphs, cave and stone carvings which might date as far back as 1100AD and are believed to be the world’s largest petroglyph field.

Magestic landscapes are not scarce thanks to the large sandunes of the desert and the two deepest canyons in the world;Cotahuasi Canyon, the deeper of the two, andColca Canyon, more famous due to its circling families of endangered Andean Condors, the world´s largest birds of flight. There are also large swathes of Arequipa´s rugged Andean territory covered by thick layers of volcanic lava. Its most important rivers are the Tambo, Ocoña, Majes, and the Chili River, which crosses the city from north to south.

The climate is mild and relatively dry with incessantly sunny days except for the moderate rains of the January to March period. This has earned it the nicknameCity of the Eternal Blue Sky. Daily temperatures rarely dip below 68°F, although the nights can be cold, especially in June, July, and August when temperatures dip between 40-50°F

Sprawling along the mountainous desert leading into the western Andean slopes, at the foot of El Misit Volcano, is the Peru’s second most populous and second most industrialized city, Arequipa. It is famously known as the “White City of Arequipa” thanks to its distinctive buildings of pearlysillarvolcanic rock. Abounding throughout theHistoric Center of Arequipa(a UNESCO World Heritage Site), their ornate “mestizo-baroque” façades have been described as intricate stone tapestries interweaving Spanish and indigenous design elements. By far the most striking example of the distinct architectural wealth of Arequipa is the massive neo-RenaissanceCathedralwhich takes up an entire side of the city’s main square. One strong architectural contrast is the vibrant blue and orange of the the 16thcentury Moorish-styleSanta Catalina Convent, a “city within a city”.

Aside from its singular architecture, the city is also famous for geological and cultural wonders including theCotahuasi and Colca Canyons, whose trails reveal waterfalls, pre-Inca and Inca ruins and trails, and picturesque villages and whose rivers offer an exciting challenge for rafting enthusiasts. In contrast to the city’s bustling modern nightlife of bars and clubs in the city center, there’s the bucolic green countryside with natural springs, Inca terraces, and a 400 year old stone mill,Sabandia Mill.

Archeological evidence places nomadic hunter-gatherer tribes in the Province of Arequipa as far back as 8000 years ago. It was home to the important Huari and Aymara Civilizations, with lesser cultures such as the Churajón, Chuquibamba, Yarabayas,Chimbas, Collagua, and Cabana settling here in their turn as well. Calamity struck several times in the 1400s with major eruptions by El Misti Volcano and the conquest of the Aymaras by the Inca, afterwhich Arequipa became an important agricultural providerm, the bread basket, for the Inca Empire.