Let Lima in to you heart

Assistance and transfer to hotel.

Free time to relax and acclimatize

We start the tour guided by the most important places and attractions of Lima, "City of Kings. "The tour includes tour of the Historic Center of Lima, Main Plaza, Government Palace, Cathedral, Archbishop’s Palace, Municipal palace, Central Reserve Bank museum*, where you can appreciate the treasures of Peru: a fine selection of gold objects, ceramics and textiles of various pre-Columbian cultures, from their origins to the Incas, which captivate and impress visitors. We continue to the Santo Domingo Church, where we discover the tombs of Santa Rosa and San Martin de Porres, and then to Lima's Colonial Balconies. Later we will visit the Convent and Church of San Francisco, the greatest monumental complex of Colonial Art in America and Cultural Heritage Site. The tour includes a visit to the Basilica of 21 altars, Convent of the cloisters, Clementine Chapter house, choir, library of the monks, museum that displays 11 canvas paintings of the Rubens School, the Sacristy with canvas paintings by Zurbaran and Rivera, great patio decorated with Seville tiles of XVI Century, Moorish arches and underground catacombs, which were formerly a large public cemetery, and finally we visit the San Martin Plaza. Time to sample Peruvian food at a good restaurant (by passengers) With our transport we sight-see the residential districts of San Isidro and Miraflores, passing the Pucllana Archeological site, ceremonial and administrative center of the Lima Culture, built in the second century AD and considered by the Incas as Ñaupallaqta, "Sacred Place"; the Olivar de San Isidro Park with olive trees brought from Spain in the fifteenth century, the Kennedy park in Miraflores and Larcomar, a tourist and entertainment center, a symbol of modern Lima and a privileged spot to enjoy a spectacular panoramic view of the Pacific Ocean. Then we go to the “Museo de Oro” (Gold Museum), where the Peruvians masterfully work with metals.

The "cire perdue"(lost wax), known in the East but lost in the West until the Renaissance, was the most used method by master craftsmen in Peru. Our excursion to the Peruvian Gold Museum will allow an appreciation of a dazzling collection of gold pieces, of various pre-Columbian cultures, some more than 3, 000 years old. The museum exhibits artefacts and jewels of gold of incalculable value in gold, silver and precious stones, highlighting ornaments and articles that Incas used in its heyday, (sons of the Sun God and monarchs of the vast Inca Empire). The fame of Peru's Gold attracted many European adventurers 500 years ago and led to the end of the empire of the Incas, giving rise to the Viceroyalty of Peru from the Spanish Crown. The Gold Museum of Peru also exhibits a valuable collection of weapons ancient and modern are considered one of the best of its kind worldwide. In its rooms are displayed armour, uniforms and objects from different times and places, including some dating back 1, 300 years BC. This presentation is known as “Weapons of the World Museum”. We continue with the tour visiting the Park of Friendship, which has its imposing Moorish arch, opened by the King of Spain, Don Juan Carlos de Borbon, a scenic railroad and its beautiful gardens and spaces that commemorate the friendship between the peoples of Peru and Spain. Transfer to the bus station. 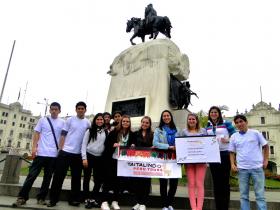